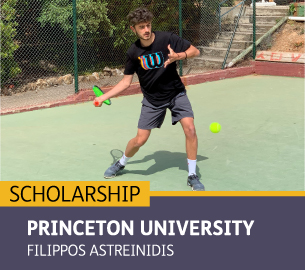 Filippos Astreinidis, a senior high school student at CGS and a member of the CGS Elite Athlete Programme, has been accepted on a scholarship at Princeton University. As part of his studies, he will be a member of the Princeton Tigers tennis team, which is one of the leading college teams in the United States.

His great success is the culmination of many years of hard work, dedication both to his sport and to his personal goals. In an interview for the school site, he stresses: “A very important role was played by the essential help provided to me by the CGS Elite Athlete Programme, because through it I was able to combine long and demanding training sessions with my academic obligations.” With a flexible and effective programme that combines academic studies and training with counselling guidance, psychological support and ongoing personalized monitoring by top coaches and scientists, he has been able to cope equally well with his athletic and academic responsibilities.

The decisive factor in his success was the substantial support ohe received from his family as well as the excellent cooperation between his parents and CGS (Costeas Geitonas School), his teachers and coaches.

Filippos’s parents specifically mention: “It was a long, difficult and often frustrating period, especially in the early days. Filippos, however, persevered in the sport, during the many hours of training, by improving his technique. Through this laborious process, with many victories but also many defeats, he matured, learned to face difficult situations and people, experienced competition and even had to face himself. Throughout this period, we were always by his side. All family life then revolved around Philip’s sport. But for as long as he persevered, we had decided to support him with all our resources. With time came the successes, step by step: his first participation with the National Team of Greece at the age of 12, the winning of numerous Greek tournaments and, chiefly, the Pan-Hellenic Championship at the age of 16, his reaching the quarter-finals with the National Team at the Pan-European Juniors Davis Championship Cup, his coming first at the International Youth Tournament run by the International Tennis Federation, and, of course, his impressive progress at the famous Orange Bowl in 2019 in Miami, where he had the opportunity to meet many US college coaches. A special role in his success was played by Mrs. Kathy Angelopoulou, the CGS IB Diploma Programme Deputy Coordinator, who proved to be our indispensable companion in our communication with Princeton and certainly Ms. Zoi Geitona (Head of School, CGS) and Mr. Christos Geitonas (Managing Director, CGS), who envisioned the programme and created all the necessary in-school infrastructure for young athletes. Of course, both his coaches at school and at the Papagou Tennis Club were his absolute guides from the beginning. We would like to take this opportunity to warmly thank Ms. Christina Zachariadou, Head Tennis Coach at CGS, and, of course, the entire support team, which consists of Mr. Reno Symeonidis, Mr. Costas Tsianos, Mr. Petros Tryfonidis’s personal trainer, and Mr. Costas Pergantis, his mental coach. “

Among his assets, Filippos counts numerous distinctions, awards and medals at national and international competitions, in which he has won the titles on numerous occasions and has made us very proud. He is a role model of a student and an athlete, as he has managed to balance his academic expectations with his high athletic performance and to achieve an extremely difficult final goal, which confirms his will-power and perseverance.

From the bottom of our hearts, Philip’s whole support team and the entire CGS family wish our student a distinguished career and brilliant performances on the tennis courts of Princeton University.