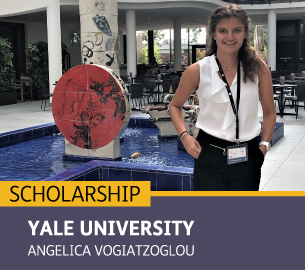 “After thirteen (13) years of studies at CGS, I can say with confidence that the high level of knowledge and the right guidance I received from my primary and secondary teachers all these years made me pursue academic success”

Angelica’s successful pathway, from CGS Kindergarten to the end of the IB Diploma Programme and Yale University, is an excellent example of academic achievement, which has been recognized with both national and international distinctions, as well as of sustained effort, dedication and love for knowledge and the world around her.

As she says: “After thirteen (13) years of studies at CGS, I can say with confidence that the high level of knowledge and the right guidance I received from my primary and secondary teachers all these years made me pursue academic success. For the previous two (2) academic years I studied at the IB offered at CGS, which, with its modern teaching materials and its global dynamics and recognition, helped me to discover my interests and achieve my goals. Since during these two years I was called upon to make important decisions for my future, I felt grateful being next to Mrs. Angelopoulou (IB DP Deputy Coordinator, CGS) and to Mrs. Papaspyrou (IB DP Coordinator, CGS), who identified my potential and helped me to highlight them in order to achieve my goals.”

As a CGS high school student / IB MYP, she participated in the World Scholar’s Cup held annually at Yale University and was impressed by the high level of teaching and the participants’ healthy academic competition. She then realized her great desire to study abroad and, in particular, at a university in the United States. As she characteristically says: “For a student who wants to study at demanding universities abroad, their passion for their interests outside the classroom also plays a major role, as these universities are looking for students who have not only achieved academic success, but also have social interests, students for whom offering to society as a whole is a way of life. “Personally, in the future I would like to work in a key position, from which I could contribute to the resolution of international problems, but mainly to help my country, Greece.